Shopping Cart
Your Cart is Empty
Quantity:
Subtotal
Taxes
Shipping
Total
There was an error with PayPalClick here to try again

Thank you for your business!You should be receiving an order confirmation from Paypal shortly.Exit Shopping Cart

Learning about atoms with electrolysis experiments!

A lot of kids probably know an Adam, but how many know about Atoms? While they might not be as funny as friendly as Adam probably is, atoms are still extremely important to learn about! They are the most fundamental building blocks of the universe, and they make up everything from space, to dirt, to air and water. Why don’t we learn a bit about atoms and elements now? If you already know about atoms and elements, it’s always good to catch a quick refresher on them!

As I said, atoms are the fundamental building blocks of the universe. Everything we know is made up of atoms. Atoms, in turn, are made of protons (with a positive electrical charge), neutrons (with no charge), and electrons (with a negative charge). The protons and neutrons hang out in the center of the atom, with the electrons hanging out and zipping around in an “electron cloud” around the nucleus. Atoms like to have a balanced cloud, meaning they like to have a certain number of electrons zipping around them. In order to do this, atoms will give up or take electrons from other atoms. If an atom gives away an electron, it becomes positively charged. If an atom takes an electron, it becomes negatively charged. As well all know, opposites attract, and these oppositely charged atoms will bond to each other as a result. Through these bonds, compounds are formed.

Compounds are often elemental molecules bonded together to form new substances. We often display the ingredients of compounds through chemical formulas, which look something like this: H^2 0. The number to the right of a letter indicates how many atoms of that letter are present. If there is no number to the right of a letter, it indicates that there is only one of that atom. The example is the formula for water, and could be read as 2 Hydrogen atoms and 1 oxygen atom (H2 and 0).

Now that we know what an atom is, what the heck is an element? Elements are the basic forms of molecules, meaning they cannot be simplified any more than in their elemental form. The periodic table lists all of the Elements known to man, organized by atomic number. The atomic number is just the number of protons in an atom’s nucleus, or it’s atomic “weight.” For instance, oxygen has an atomic number of 8, meaning it contains 8 protons in its nucleus.

Wow! We know, that’s a lot to take in. But really, it’s very easy once you learn how to read the periodic table and the chemical formulas. It becomes easier to understand when you can see it with your own two eyes. Below is a very easy experiment to do just that, while also learning a bit about electricity and conductivity.

-A glass or plastic container 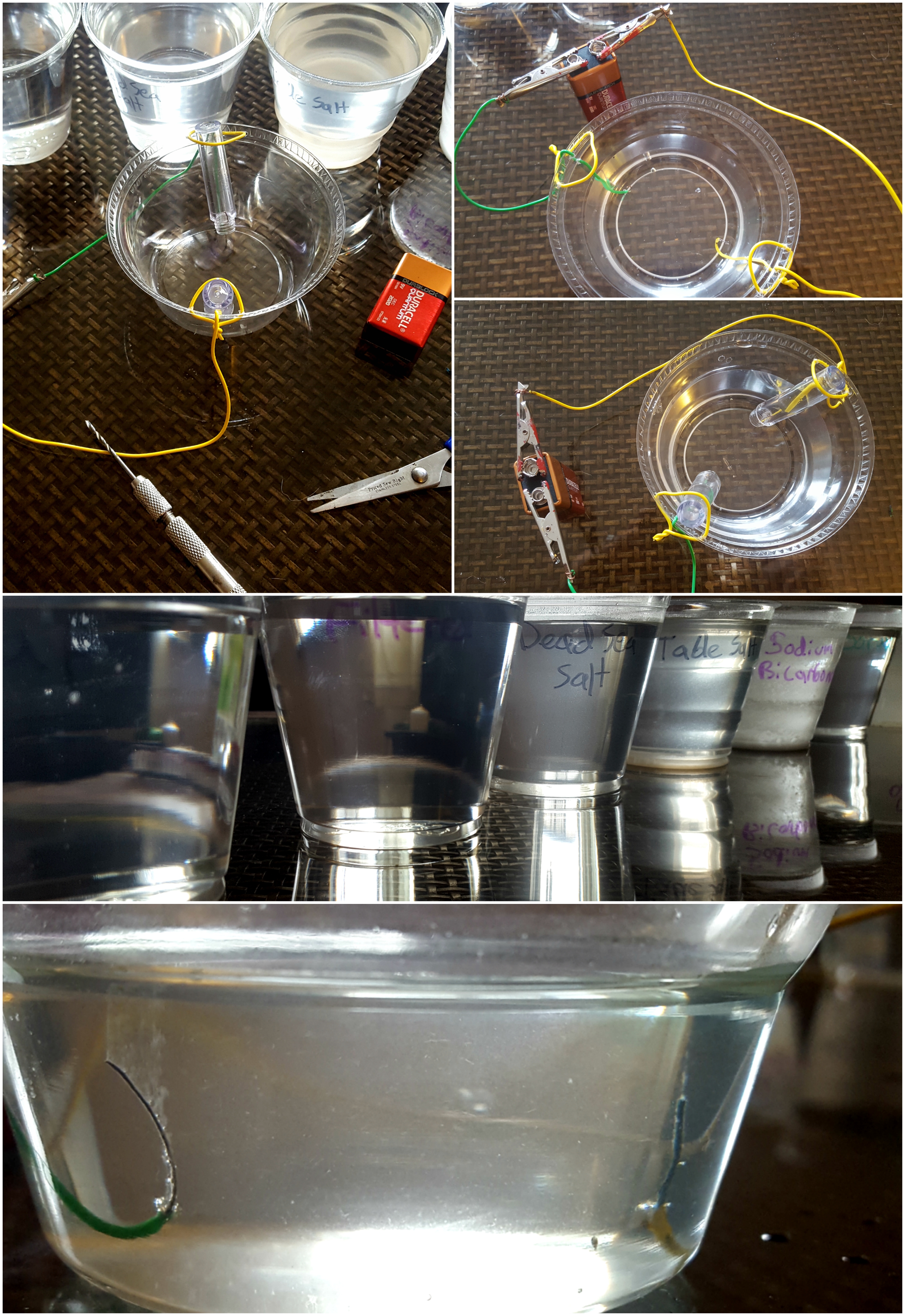 Start by stripping the insulation off the tips on either wire. Position your wires inside of your container, with the exposed end near the bottom. If need be, use tape or glue to hold your wires in place. If you’re using a plastic container, you can poke holes in the sides (above the water line) and weave your wire through to hold it in place, like we did. Once done, you have created a simple electrolysis chamber!

Now you’ll need to create a few conductive solutions to experiment with. In our experiments, we made different solutions using filtered water, tap water, dead sea salt, table salt, sodium bicarbonate, borax, and dish detergent. We found that a good mixture for this experiment is 3 parts solute to 4 parts solvent. You can also experiment with other electrolytic solutions such as sports drinks or fruit juices.

Add your solution to your electrolysis chamber, being sure to cover your exposed wires. Next, fill your tubes with the solution and place a tube opening over each wire end inside the chamber. Keep in mind when placing the tubes that the idea is to collect gasses in them from around the exposed wires.

DRY YOUR HANDS THOROUGHLY before moving forward, as you will be working with electricity. Even better, be sure your protective gear is on from this point forward. Carefully attach each wire to a terminal on the battery (one positive, one negative). You should see bubbles start coming from the wire ends inside your chamber. Now we wait! Over the next five minutes, hydrogen and oxygen will collect in the tubes, depending on the charge of the atoms.

Again, as electricity flows through the water, it is breaking up the bonds between atoms and “decomposing” the water into oxygen and hydrogen. Water, or H^2 0, has twice as many hydrogen atoms then oxygen atoms. Because of this, you should see one tube filling with gas twice as fast as the other tube.

Once you’re done, clean out your chamber and tubes and try the experiment again with a different solution. You may notice if you use plain filtered or distilled water that there will be little or no reaction. The same may happen when you use certain solutes. This is because there are little to no ionic or electrolytic substances in these fluids to carry the electrical charge.

As an added bit of fun, remember that you’ve collected pure hydrogen or pure oxygen in your tubes, which are both incredibly combustible gasses. Simply collect the tube, being sure to keep it sealed. Hold a flame near the opening and unseal it. You should hear POP and see a little flame travel down your tube. 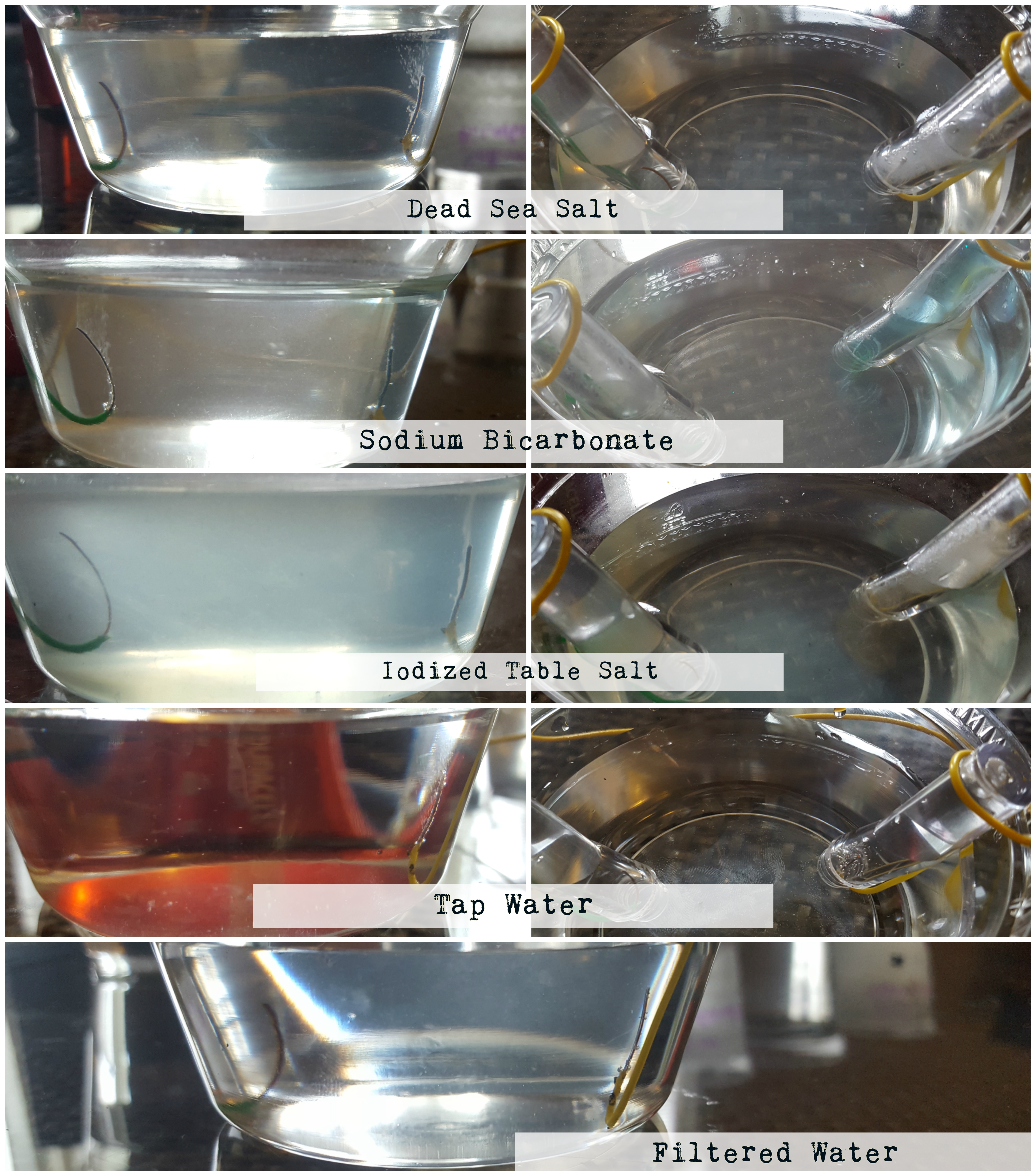 -This is another one of those projects that made me wonder why in the world we never did this experiment when I was in school. Even as an adult, it mesmerized me and instigated a great curiosity in me about many new topics I’ve not previously looked into.

-Seriously, safety gear. While most of the solutions you can come up with are likely harmless, it’s always better to be safe than sorry. While the shock induced by the 9v battery is, in most cases, not seriously harmful, it is rather painful. For this reason, wearing rubber, non-conductive gloves is recommended when working with the battery and wires.

-Your chamber will likely not look like mine. Just use whatever you have available to you to make your chamber. Not only could it save you money, but you might be upcycling something that would otherwise go in the trash. No test tubes? No problem! Again, just use whatever you have. We always save lip gloss tubes for later re-use, so two of those tubes stood in for our test tubes.

-Depending on your solution, you may notice that the oxygen tube isn’t collecting gas. A few of our solutions caused the oxygen to pool together in the bottom of the cup, almost looking like an underwater puddle. Experiment with your solutions and try to find which one works best for you. For us, it was just a simple solution of iodized table salt and water.

What were the results of your experiment? What solution seemed to be most conductive? Which gasses collected near the negative or positive wires? Share your experiment with us in the comments. We love seeing and hearing about your projects!

Did you enjoy this post? You can continue learning about atoms and their charges with this DIY Electroscope project!

Reply Lasix
9:08 AM on November 6, 2021
Purchasing Legally On Line Amoxicilina Website In Internet