An underwater volcano in your home!

They have been worshipped as the homes of the gods. They have been studied by a wide range of scientific minds, from geologists to microbiologists. They can destroy and create. Volcanoes are extreme features on our landscapes, and the though the processes that control them are relatively well understood, there’s still so much we don’t know about them. Even less is known about oceanic volcanoes, due to the difficulty of studying them in extreme underwater environments. One thing that is known, however, is how they commonly form.

Terrestrial, or land-based, volcanoes usually form at or near an area where tectonic plates meet. These plates, which make up the crust of the earth that we live on, kind of float and slide on a layer of molten magma. As these plates pull apart, it allows enough space for some of this magma to reach the surface. As this magma slowly cools, it forms rock, and continues building into a large mass. That mass is the volcano. Under the ocean, though, there isn’t much to support the weight of the ocean floor when the plates come apart like there is with land. When this happens, the sea floor caves into a chasm and allows a crazy amount of water to rush in and start cooling magma. As the magma rises from under the plates and meets the cool water, it hardens into rock and grows into a volcano that way.

If this all seems a bit complicated, that’s because it is. Geology, plate tectonics, and volcanology can all be very complex subjects. Don’t fret, though! There’s an easy way to understand this concept, and you probably have all the materials to do so at home. Let’s make an underwater volcano! 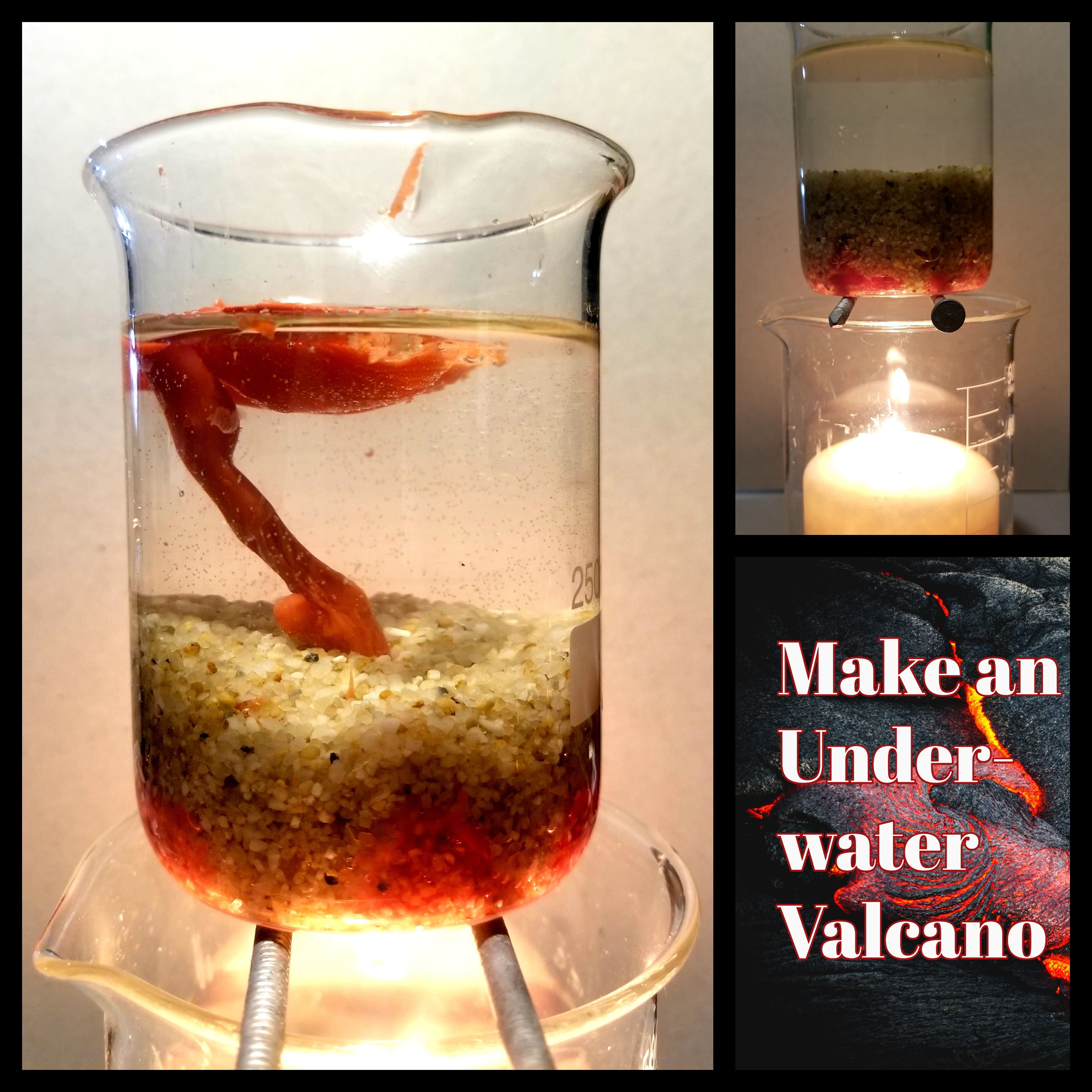 In the smaller container, you’re going to need two layers. In the bottom, place a layer of candle wax. Shredded or chunked wax works best. This wax will represent your magma. The next layer will be sand. This sand represents the sea floor, and helps to hold your buoyant candle wax down at the bottom. Fill the rest of the container with room temperature water. In the larger container, place a lit candle, which will represent the heat from the deep earth. Suspend the smaller container over the flame in the larger container, and wait.

Over time, you will notice the wax start to melt and work its way through the sand. Eventually, part of the sand should collapse and the “magma” should shoot up into the water, cooling almost instantly and forming “rock”. If you need to speed things up a bit, you can carefully poke a hole down through the sand with a pencil. Be sure to record your observations throughout the process.

While pretty much any candle wax will work (or even crayons), we happened to have some extra red wax. This helped create a nice visual, magma like effect.

How did your volcano turn out? How long did it take to erupt? Tell us about your project in the comments, or on Facebook, Twitter, or Instagram.