Shopping Cart
Your Cart is Empty
Quantity:
Subtotal
Taxes
Shipping
Total
There was an error with PayPalClick here to try again

Thank you for your business!You should be receiving an order confirmation from Paypal shortly.Exit Shopping Cart

Proteins are essential for life as we know it. They are the building blocks of muscle and are essential to healthy brain function. Every animal we know of need protein in some form. What is this super important thing though? Well first off, protein isn’t a singular thing. They do all have an amino acid structure in common though-that is, they are made of organic compounds. These compounds usually consist of things like carbon, hydrogen, oxygen, sulfur, and other elements.

Some of these elements form bonds with each other, leaving the protein structure looking sort of like a hair scrunchy that went through the washer. But that’s ok! It’s this scrunched up structure that helps the protein function properly and protect important parts inside. When a protein denatures, or when it loses its natural structure, it unravels and stops working. Generally, when a protein denatures, it means those bonds that hold it together were broken.

Let’s learn more about this concept by actually denaturing some proteins! 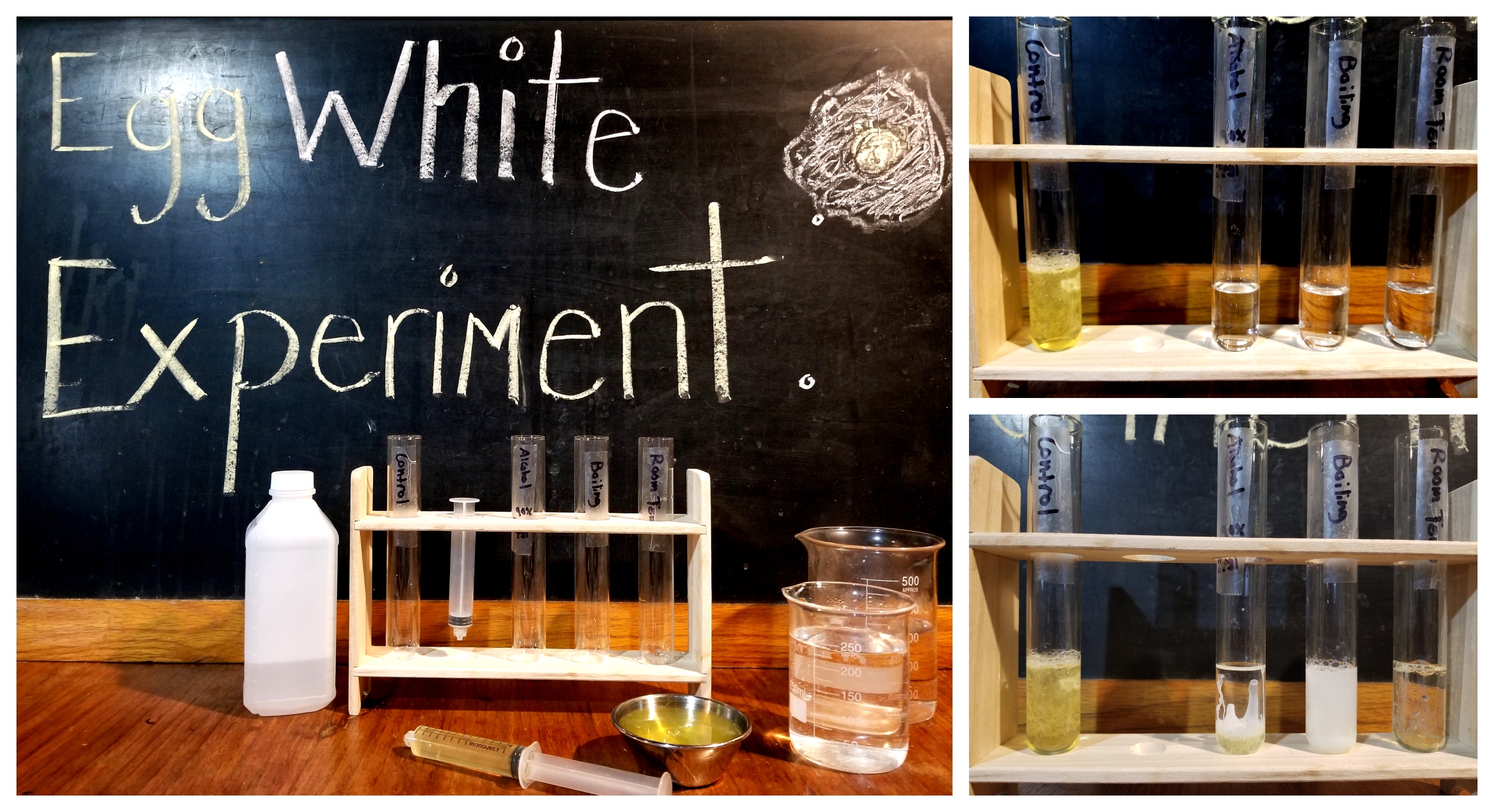 First, use the clear tape and marker to label each tube. One will be the control, one will be room temperature water, one will be boiling water, and one will be rubbing alcohol. In the control tube, add 12ml egg whites. This tube will show you what unchanged egg whites will look like, and will be used to compare against the other tubes.

Next, add 12ml each of the other fluids to their corresponding tubes. Using a clean syringe, add 4ml of egg white to all four tubes. You should notice an immediate reaction in at least one of your tubes. Record your observations over the next five minutes or so. Let your experiment continue on its own for about half an hour. Come back and record any new changes you can observe.

Most of the proteins in egg whites are held together through hydrogen bonds. When exposed to the heat of boiling water, those bonds break pretty quickly and the protein denatures. This method of denaturing the egg white proteins is the same method we use to cook them!

Rubbing alcohol breaks those same bonds, but it will take longer to fully denature the proteins in the egg white. Unlike heat, alcohol needs time to work its way through the egg whites and react with the proteins.

You may notice a little bit of denaturing happen in the room temperature water, which is likely due to the proteins being a bit too close to their denaturing temperature.

If you are having trouble getting any of your solutions to react with the egg whites, don’t be afraid to swirl the tubes around or even stir them up. Just be sure to use a separate utensil for each tube to stir, or to wash your utensil between containers.

LiveScience: What is a protein