Every seventeen years, like clockwork, they emerge. They come from holes in the ground and swarm our trees. But don’t worry! They’re harmless! Unless you’re a young tree, that is… I’m talking about the periodical 17-year cicada, or M. septendecim, M. cassini, and M. septendecula to be exact. The Magicicada Invasion is one that we are well acquainted with here in Ohio, especially with the recent emergence of the 17 year Cicadas from Brood V.

As a born and raised Ohioan, this is only the second time in my life I’ve gotten to here and see these incredible creatures. As a child, no matter how many times I was told they were harmless, I still refused to go near one, and would have an absolute meltdown if one flew into me. As an adult, I have come to admire these bizarre looking bugs. That being said, I have heard quite a few members of the younger generations asking “what in the world are these things and where did they come from?”

To start, they are bugs. Not just bugs, but true bugs-meaning they belong to the taxonomic order Hemiptera. Cicadas share this classification with leaf hoppers, shield bugs, and hoppers. Though some people believe they look like giant locusts and many people around these parts call Cicadas locusts, locusts actually fall under the taxonomic order of Orthoptera, making them unrelated aside from being insects.

For insects, cicadas have a relatively long lifespan, but only a short period of it is spent above the ground. The cicadas we see emerge are coming to the end of the 5th part of their life cycle, and are called nymphs. Up until they emerge, they live in a dark, underground world where they drink the juice from tree and plant roots for food. During the first five stages of their lives, over 17 years, they grow from a millimeter or two in size to nearly a full grown adult.

In the few weeks before emergence, they begin digging and constructing their exits. The exit tunnels can be seen as small holes, or sometimes little towers, usually near the bases of trees or near vegetation (top left image). On emergence day, they leave their home, find a good spot on a nearby tree or plant, and begin to molt-also called ecdysis-into the final stage of their lives. Keeping in mind that, with no natural defenses and an abundance of predators, as well as the risk of being trapped inside their own molt, the cicada has survived this long, they will undergo a period of maturation, leaving behind thousands of empty shells (top right image).

Over a few days, their exoskeletons will harden and turn darker. The dark color of their bodies is important. Cicadas are cold blooded, and dark color of their bodies helps them absorb more heat from sunlight. Once this period is over and they are full-fledged adults, they will begin feeding on the fluids of woody vegetation and mating. It is once the cicadas start feeding that young or weak trees are at risk for potentially hazardous damage.

The mating calls of the cicada can be deafening. The call we hear is the male vibrating his tymbal, which is an organ that works sort of like a drum. Tiny muscles pull on membrane, creating the song through the vibrations. Just as we wouldn’t speak if we didn’t have a reason to, cicadas don’t sing unless they have a reason to. Their calls each have a purpose, whether it be an alarm, establishing territory, chorusing with other males to attract more females, or a mating call. If it is a mating call, the female will respond by snapping or flicking her wings. While they cannot bite or sting, this call poses a different threat altogether. The synchronized chorus of cicadas is one of the loudest sounds in nature, reaching decibels that can be harmful to your ears.

Once mated, the female drills tiny holes into tree branches and trunks, and deposits a clutch of eggs, potentially laying hundreds of eggs between multiple nest holes. After mating and laying eggs, the adult cicadas die, just three or four weeks after emerging from the ground. A month or two later, newly hatched baby nymphs will burrow out of their tree branch nests, climb to the extremities of their birth homes, and drop to the ground below. There, they will burrow until they find a suitable root or rootlet to feed on, and begin the 17 year cycle anew. 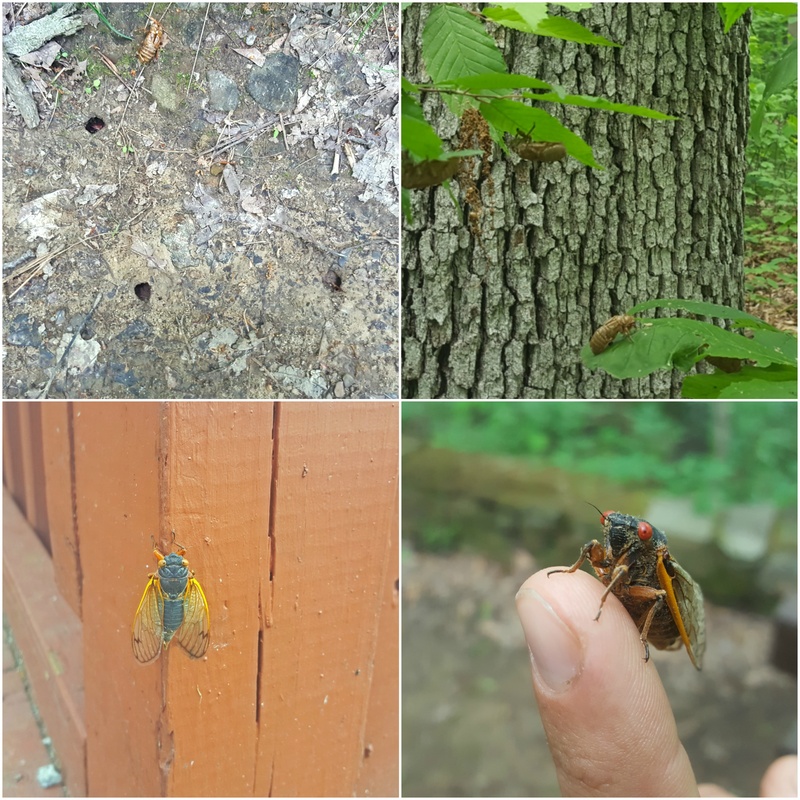 Cicada Mania: Information on Cicadas and where to Report sightings to help cicada researchers